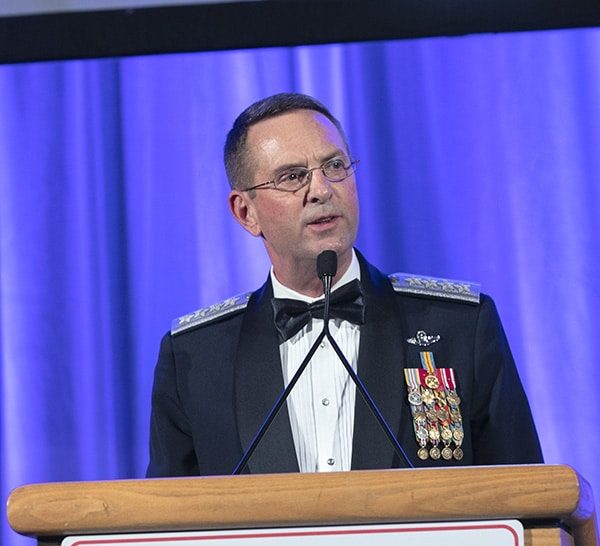 NEW YORK – To a crowd of over 500 industry and national security leaders on Wednesday evening, the nonprofit Business Executives for National Security presented their annual Eisenhower Award to real estate executive and Hall of Fame quarterback, Roger Staubach, and the Chief of the National Guard Bureau, Air Force General Joseph Lengyel.

Remarking on the honorees, BENS President and CEO, retired General Norton Schwartz noted, “[Lengyel and Staubach] tell the story of the sacrifice, the grit, and the nobility of the citizen-soldier. Together they exemplify the concept of service to one’s community and one’s nation.”

The evening was dedicated to the ‘citizen-soldier’; Americans, such as those in the National Guard, who also assist during national and natural disasters in addition to providing national defense. Schwartz codified the evening saying, “Our military keeps the peace; protects the homeland; and defends tyranny and aggression. But, when needed, our troops also build roads and hospitals, maintain levees and bridges, dam rivers and fight fires, save marooned ships and rebuild cities after earthquakes and hurricanes.” Lengyel accepted the award on behalf of the men and women of the U.S. Army and Air National Guard.

Furthering the evening’s theme and attributing the qualities of citizenry to Staubach, BENS Chairman, Norm Chambers remarked, “A citizen must care for his or her community…As a football star, [Staubach] served his country, because it was the right thing to do. As a business leader, he donated his time and his resources to the community around him, including veteran causes.”

The evening also provided further recognition of the U.S. Air Force 353rd Special Operations Wing who played a decisive role in the Thai cave rescue earlier this summer. Representing the Wing was Master Sergeant Derek Anderson who was one of the primary architects of a rescue operation that ultimately saved twelve boys and their soccer coach in Tham Luang cave system in Thailand.

BENS, comprised of over 450 business leaders who volunteer their time and expertise to assist the national security community, present the Eisenhower Award annually to outstanding public servants and private citizens whose contributions reflect President Dwight Eisenhower’s definition of security as, “…the total product of our economic, intellectual, moral and military strength.” Recent recipients include Amazon.com Founder Jeff Bezos and Marine General Joseph Dunford, Chairman of the Joint Chiefs of Staff.

BENS is a nonpartisan, nonprofit comprised of over 400 business leaders who volunteer their time and expertise to assist the national security community. Past recipients of their Eisenhower Award include civil servants such as Secretaries of State Michael Pompeo and Hillary Rodham Clinton; military leaders such as former Chairman of the Joint Chiefs of Staff, General Joseph Dunford; and business leaders such as Cisco CEO Chuck Robbins and Amazon.com Founder Jeff Bezos.

China’s ambition to collect a staggering amount of personal data from everyday citizens is more expansive than previously known, a Times investigation has found. Phone-tracking devices are now everywhere. The…

Over the course of just six months, three senior defense officials responsible for technology programs announced they were stepping down, voicing disappointment in a culture they view as an impediment…